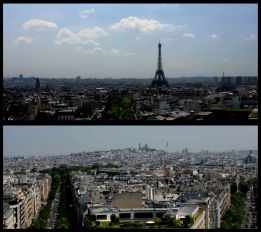 View from the Arc de Triomphe

The first thing we did when we arrived was change out our remaining pounds for Euros at Gare du Nord. Then we stood in a queue for metro tickets, before trying to squeeze both of us and packs onto already very full trains to our accommodation. Thankfully, we arrived just at a nice time for check-in, so dumped our bags and went straight back into town to start exploring!

An unexpected highlight was easily the opportunity we got to see the Mona Lisa uncrowded, by being at the Louvre early in the morning, beating the crowds. That said, the painting directly opposite is even more incredible, and I find it sad most people don’t seem to notice it. 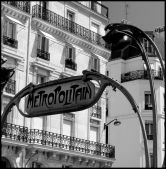 Our worst experience in France was our night in Avignon. The accommodation was rank. Far and away the worst of the trip. We also lost our tour group, which wasn’t all bad – the dinner we had sitting on the banks of the river was pretty sweet. Other than one rough lunchtime trying to find somewhere to eat in the Jardin des Tuileries / Champs-Elysees, I cant really say we had a single bad experience in Paris.

Our most abiding memory would have to be the smell of the Paris Metro. They all stank. We never saw anyone actively peeing on the wall, and I don’t actually know if they still do on a regular basis or whether perhaps the smell is embedded into the tiles? Anyway, it was inescapable.

We wish we had had more time and energy to climb the Eiffel Tower. It was hot when we had the opportunity, the same day we had already climbed the Arc de Triomphe. The line for the lift was about 4 hours long (no thanks), and the other option was the stairs, which was also significantly cheaper. For reasons I will never fathom, especially given the climb we later did at St Peters, we opted not to take the stairs.

Our absolute favourite activity was getting up high for a view over the city. Whether it was the Arc de Triomphe, the top of la Tour Montparnasse, or the steps up to the Sacre-Couer in Montmartre. All offered fantastic views over the city, and great spots to sit and ponder the wonder of the fact that we were really there!

The most random thing that happened to us started what felt like a chain reaction. We grabbed the Funiculaire up to Sacre-Coeur one day, and as we were about to depart, in raced a dozen Military Police with very large weapons. Strange. Then we kept seeing Federal / Military Police EVERYWHERE.

We definitely need to go back and do Paris again. This time, staying in the city proper, rather than way out in the boondocks. I want to see Paris by night, and not just from the lookout at Trocadero or the window of the bus. I want to walk the Champs-Elysees in the evening.

The last things we did before we left Paris were visits to the Opera (Palais Garnier), which was INCREDIBLE, and the Musee Rodin, which was a nice respite from all the rushing around we had done. 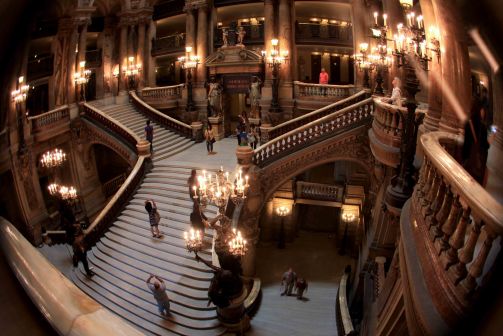